The Dawn (And All Its Honesty) 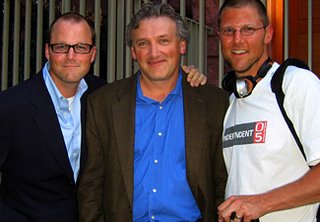 "I think we're going to be friends," Tim said, looking up his signature.

He rose from the small, walnut-laminate desk tucked in the back of Barnes & Noble, and smiled.

"Time for that hug shot."

Camera and all, Chris got a big bear hug too.

I left the office at 4:20. Under false pretenses, no less. "I'm Proud Of You" author Tim Madigan (and his Gotham Books publicist, Beth Parker) was due for his "Mister Rogers & Me" interview at Christofer's apartment at five o'clock. I had to cover forty blocks in forty minutes. And I hadn't so much as eaten lunch. The 2/3 couldn't move fast enough. The woman at H&H couldn't hand me a cinnamon raisin bagel (my poor substitute for lunch) quickly enough. Pedestrians couldn't get out of my way speedily enough. Steam was rising from my ears. I tried deep breathing, and counting. I looked at my watch...

Tim's eyes are like sapphires. They twinkle like bright stars. His handshake is firm. His hug, solid. His vulnerability, his sheer sense of submission to that which is greater than him -- the Loving Mystery of the Universe -- is as apparent as the nose on his face. Here's a Midwestern-born, Texas-based newspaperman that embodies all that I hope to: humble, honest, expressive, courageous.

We sat together in Chris' apartment (recast in full-on film lighting -- so much so that Chris was worried we'd blow a fuse, and conveniently located one block from the Barnes & Noble at which Tim was reading) for well over an hour. And though I had ripped voraciously through his book, and prepared a notepad full of questions, and though I was playing The Journalist (interviewing, ironically, a journalist), and we were on camera, we had a wonderful, meaningful, candid conversation about (literally) truth, beauty, and the pursuit of happiness.

Tim's book chronicles his friendship with Mister Rogers within the context of his own personal trials. Mister Rogers unconditional love provided the foundation upon which Tim found himself able to manage life's great challenges: difficulties in his marriage, with his father, and with the loss of his younger brother.

What I loved most about my time with Tim, perhaps, was his absolute concession that the whole thing -- why Mr. Rogers had befriended him, why he had a deep and meaningful friendship with one of history's great men -- was a complete mystery. Likewise that Mister Rogers had brought us together as if by some great design. Here we were, two journalists from the Midwest with ten years and two-thousand miles between us, brought together by the shared friendship of a great man.

Bo Lozoff might call it a glimpse of the Divine. Amy might call it one of those "impossible to explain away things." It was just another Great Mystery.

Tim and I covered a wide spectrum of subjects, all of which were deep, simple, and meaningful. Three anecdotes stand out.

In one of their first conversations, Mister Rogers said to Tim, "Do you know what the most important thing in the world is to me right now? Talking with Tim Madigan."

Tim and Mister Rogers were at church together. The congregation had a sharing time at the end of mass. After a few short announcements, an elderly woman stood and began speaking about The Gulf War, hammering away at the current administrations, military hierarchy, soldiers, and the supportive populace. People were rolling their eyes, shifting in their seats, and whispering amongst themselves. But Mister Rogers leaned towards Tim and said, "You can be sure that at some point in her past, she suffered a great personal loss because of war."

Tim and Mister Rogers corresponded frequently. At one point, Tim decided that he needed to be completely honest with Mister Rogers, to bare his darkest secrets, and deepest doubts. He wrote Mister Rogers a letter explaining that his insides were a mess. He was filled with self-doubt, self-loathing and shame. He asked Mister Rogers if he could still love someone who was so messed up inside. Mister Rogers responded, "I will never forsake you."

We can be present with whoever we are in relationship at any given moment. We can practice empathy. And we can love them no matter what.

Towards the end of our conversation, Tim said something about Mister Rogers' legacy and how it was bearing out in these chaotic times. For an instant, I wasn't sure whether he thought that virtue, kindness, and empathy were losing the battle with amorality, insensitivity, and narcissism, or that hope, love, and intimacy would prevail over despair, hate, and isolation.

I'm not sure what he said, or how he said it -- maybe it was the hug. By the time Chris finished shooting, and we all finally tumbled out of the bookstore -- these disparate lives brought together by the one, great, loving man -- I knew where Tim stood on the whole thing. And I know where I stand.

Chris and I initially discussed shooting Tim and I strolling up 82d Street towards Barnes & Noble. Filmmakers call it the "walk and talk." At the last minute, though, I decided it was too contrived. Though Tim, Chris and I were likely to make a connection, and develop repoire, feigning a deep friendship within the first hour of meeting one another might be a bit much. Which I told Tim. "So you don't want the hug shot at the end?" he joked.