Meeting The Man Behind "Meet The Press" 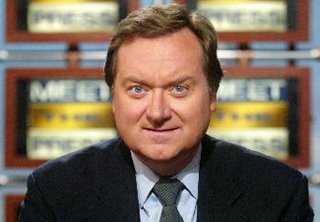 Weeks go by when I feel like I'm no making progress at all on "Mister Rogers & Me." Sometimes it feels like some sort of fantasy, or delusion, as I try and find time to write letters and make calls on behalf of the film. Today, though, we take one major step forward.

Great news! Thanks so much, Lisa. Monday, November 13th at 10am is perfect. While the crew is small (my cameraman/brother, Christofer), we will need a few minutes to set up (DV on tripod, small light) prior to speaking with Tim. Please let me know when and where you'd like us.

So it's on! In less than a month, Chris and I will be strolling into NBC News' Washington, DC, bureau and interviewing one of television's best, most-substantive and spin-free interviewers. From Mr. Russert's bio:

Tim Russert is the Managing Editor and Moderator of Meet the Press and political analyst for NBC Nightly News and the Today Program. He anchors The Tim Russert Show, a weekly interview program on CNBC and is a contributing anchor for MSNBC. Russert also serves as senior vice president and Washington bureau chief of NBC News.

He has received forty-three honorary doctorate degrees from American colleges and universities and has lectured at the Kennedy, Johnson, Nixon and Reagan Presidential Libraries.

Yikes, right? The guy's interviewed every major head of state for the last twenty years. More importantly, he done so with a sense of fairness, balance and integrity reserved for only a few major news figures: Walter Cronkite, Tom Brokaw, Dan Rather. He's one of the best, one of the good guys, one -- as Fred would say -- of the "helpers."

Now we have to confirm Senator Tom Harkin, and we have ourselves a major, major day in DC.
Posted by Benjamin at 3:07 PM