Arthur And The Tribeca Grand Gesture 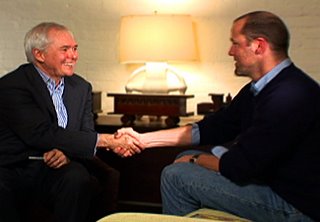 As telling as it was that "Arthur" creator Marc Brown invited Chris and me into his Tribeca loft on a Sunday evening, it was the end of our interview that was the most revealing of his character.

Our original objective was to shoot Mr. Brown's presentation at the 92d Street Y, but the union buyout fee was to steep for our budget (as there is no budget). Still, I wanted to see the man in action. So Abbi and I -- conspicuous as the only to non-parents in the auditorium -- smiled our way through Marc's sweet and simple presentation.

The auditorium was filled with six-year-olds, but I was struck by how adult his presentation was. Though he spoke in simple sentences, much of his speech -- like the fact that he works with both Barbara and Laura Bush as a literacy advocate despite having not voted for either of their husbands -- was a wink and a nod to the parents. Similarly, he made a pitch for his crusade against child obesity with some staggering numbers: junk food advertisers spend $10B a year targeting young people.

His presentation was brief, and sweet. He showed photos from his childhood, of his home and studio in Hingham, MA, and even of Mister Rogers (as he promised). The event was something like an autobiography crossed with a book signing crossed with a reading. And when Marc Brown read, the room fell silent.

He revealed that he did't like being a kid, and thought other kids were "kind of odd." As an adult, though, he considers kids his bosses, and finds them interesting, and their parent's odd.

A few hours later, Marc welcomed Chris and me into his home. He couldn't have been more gracious and open, even going so far as to re-arrange furniture and lighting for the shoot. His loft was open and spacious, with just a few large, modern canvases on the wall. A giant, stuffed Arthur rested near a crib. His granddaughter, Sky, sat nearby at her computer, skeptically watching us preps her grandfather.

I settled into a deep, cream-colored couch and fell silent as he told me stories about meeting and working with Fred Rogers.

Though Marc had long trusted "Mister Rogers' Neighborhood" as one of only a few sources of quality programming for his eldest son, Tolon (for whom he spun the first Arthur yard as a bedtime story), it wasn't until well into Arthur's PBS run that he met Mister Rogers in person. He told me of that meeting with a sense of child-like wonder, joy, and gratitude.

"Mister Rogers' Neighborhood" later visited Marc's Hingham, MA, studio. Soon thereafter, Marc drew Mister Rogers into "Arthur." What intrigued me, though, was the fact that the two had been discussing collaborating on a project just prior to Fred's death.

Both Fred Rogers and Marc Brown, I've come to learn, were self-described "chubby kids." Both built careers reassuring kids that they were unique, and special, and one-of-a-kind. The project they discussed was about a giraffe that didn't feel like he belonged.

It was difficult not to seize on the point, as one of the things that most endeared me to Mister Rogers himself was that he cherished each individual's uniqueness, even if that uniqueness (a handicap, a big nose, a stutter) made them feel broken or un-whole inside. Marc, like Susan Stamberg before him, described Fred's ability to find what's missing in a person, and address it. For all three of us, it seemed -- nay, for all of us -- what's missing was a sense of belonging.

Therein lies one of the challenges of these interviews, though. With notables like Tim Russert, Susan Stamberg and Marc Brown, my window is narrow. Though all three were generous with their time, energy, and emotional availability, it's difficult for me to really go deep with them. More succinctly, there is a part of me that wants to belong to them, that wants to be friends with them, that is needy in some way that Mister Rogers identified all those years ago. That is, of course, impossible. And not the mission of the film. But an interesting lesson.

I could hear his family stirring upstairs as Marc and I chatted. Soon, his daughter-in-law, Christine, was at the door. "I'll meet you at the restaurant in a few minutes," he told her. Suddenly aware of the time, I looked down to my notes to pick my favorite remaining questions. I asked them, asked that he sign a few copies of "Arthur's Nose" (for Ethan and Edward) and "Arthur Writes A Story" (for me), then called it a wrap.

"I hate to hold you up from dinner," I said. "But these lights will take a few minutes to cool down."

"Oh, that's fine," he said. "You guys can just show yourselves out whenever you're ready. No hurry."

And with that, "Arthur" creator Marc Brown smiled, wished us luck, gave us hugs, and left us -- two strange men he wouldn't have known from Adam just two hours prior -- alone in his home with all the trust and every confidence in the world.
Posted by Benjamin at 10:26 PM