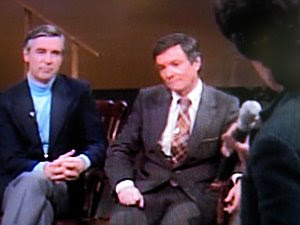 "Mister Rogers Talks To Parents About Divorce" premiered on Sunday February 15, 1981, just as my parents' marriage was falling apart.

Unfortunately, it took twenty-five years to learn of the show's existence, and until this afternoon to see it myself for the very first time.

All I knew of Susan Stamberg's relationship to Fred Rogers when I walked into NPR's Washington, DC, studios way back in November, 2006, was that the two had taped some television specials together in the '80s. Imagine my surprise, then, when I discovered the topic of the specials was divorce, something my family had endured, and about which Mister Rogers and I had conversed.

When our copy of the show was finally shipped from FCI last week, my sense of serendipity was heightened still when Chris told me the original air date.

The hour-long special is nothing if not deep and simple. Susan hosts, fielding questions from the WQED studio audience, while Fred and author and bereavement counselor, Rabbi Earl Grollman, respond. Periodically, Fred tosses to brief interview segments with young children.

The set, graphics, and wardrobe are antiquated to be sure. Still, the premise, pacing and patience is so Fred Rogers: deep and simple through and through.

At one point, Susan asks him why the Neighborhood had recently taken its viewers on a tour of the inside of a plane.

There are a lot of children who have to fly alone back and forth between their mothers and their fathers. And I've talked to stewardesses who say that sometimes they're scared, and sometimes they cry.

For any of you who know anything about my recording career (and for those of you who don't, my 2001 song, "Crash Site," was a metaphor for my parent's divorce, and the airplane trips shuttling between them), it was a section I had to watch twice.

As Susan wrapped up the show, and Fred said his final words -- warm and sage as always -- I found myself standing there in front of the television with a big smile on my face, and even bigger crocodile tears in my eyes.

"Remember," he said, "How persistent the feelings of childhood are all through our lives."
Posted by Benjamin at 2:02 PM

That's brilliant, Benjamin. I love those moments of spiritual serendipity. In Amy's new book she talks about the ancient Chinese belief that an invisible red thread connects those who are destined to meet, regardless of time, place, or circumstance. Fred's comments back then, your song, and your being touched by his words now, illustrated beautifully how you both are stitched together in a way that transcends space and time.

Thank you for these beautiful thoughts, Benjamin. I wonder if your phrase "deep and simple," which you use to describe Mr. Rogers, comes from the title of Bo Lozoff's book? I know you met Lozoff at Kindness House. Seems like the "red thread" continues to work in your life.

Crocodile tears is the wrong phrase - it means fake tears. You were crying real tears, I assume, like I do, pretty much any time that I see Mr. Rogers say or do anything!