What's Going On With "Mister Rogers & Me"? 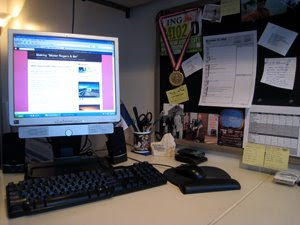 I'm glad you asked. Or, I'm glad my pen pal Magnus did.

"When I inquired about the documentary a few months ago [you said] it was on hold," he writes. "I don't know what the progress is, or what's holding it up, but I just wanted to encourage you to keep at it. I know you are extremely busy with all your other endeavors, but this project is as important now as it ever was. Keep at it! You were chosen to remind people of the deep and simple."

Yes, I am busy. My day job at MTV News continues to expand. And I'm releasing two records in the next three weeks: my own "Live At Rockwood Music Hall" tomorrow, and our second holiday benefit CD, "A Holiday Benefit, Vol. II," December 1.

So here's the deal.

It took us an inordinate amount of time to get the first thirty minutes together for our Independent Film Week application. We worked every night until three o'clock in the morning for about a month. Then we didn't get in, which knocked the wind out of our sails. Then summer swallowed me up: Movie Awards, Video Music Awards, etc.

After a period of deep discussion and soul searching, it became abundantly apparent to my brother, Christofer, and I that he didn't have the bandwidth to finish the edit. His day job requires him 10-18 hours of non-linear editing as is. Plus, he's a father of two with a third on the way.

So, "Golden Days" director Chris Suchorsky currently has a drive with all of our footage, and has agreed to edit the Tim Russert segment on spec. If that works out (which we should know by Thanksgiving at the latest), Wagner Bros. Pictures, LLC, will hire Chris to finish the film with us.

If not, I'm going to take over. I've learned enough ProTools to self-produce my own albums (see: "The Invention Of Everything Else"). I figure I can do this too. I just won't do anything else after work and on weekends until it's done. If I were a bettin' man, I'd say that's where we're headed. Which is fine with me, as no one is more committed to finishing "Mister Rogers & Me" than me.

Mister Rogers is everywhere in my life. Here in my office, there are three photos of him within eyeshot of my computer monitor, and one more on the shelf above my head. At home, he's on the fridge, and in the living room. Rare, then, is the day pass in which I don't pause, look at him, and smile.

So, Magnus, thanks for asking.

We will finish the film.

I promise.
Posted by Benjamin at 3:42 PM

Hello Benjamin, thanks so much for moving forward with this project. I too have a photo of Mr. Rogers within eyeshot in my office. I think of him often and miss him very much. I also have a photo of myself, my sister and Mr. Rogers taken on Nantucket in 1972. I used to have it on the bulletin board in my dorm room as an undergrad in the 80s. A college friend of mine recently asked me to post it on my Facebook page since it was a favorite of his. I look forward with great eagerness to your film and wish you luck with your heartfelt endeavor.

If you're still interested in shopping it to festivals, you should check out the True/False Festival here in Missouri. It seems to draw a decent level of national attention.